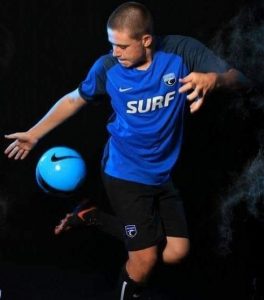 Meet Hunter Talak, who has been playing soccer since he was 4 years old and started playing Club Soccer at the age of 8.  Hunter’s dedication, drive, and hard work earned him his first spot on the U.S. Soccer DA at the age of 12.

At 13, he played in the MIC soccer tournament in Spain, competing against teams such as Barcelona and Girona Fc. He is currently playing for San Diego Surf Soccer club on the U17’s U.S. Soccer DA while also training with the U19’s.

Its also worth mentioning that Hunter won a national juggling contest with a score of 8,247 juggles.

Hunter has chosen to be homeschooled since he was in the 6th grade, as homeschooling provides a more flexible education schedule that is a better fit with his training schedule and team travel. Hunter chose IVLA high school because of its great success stories and NCAA approved honor and AP classes.  Choosing IVLA has allowed Hunter to pursue his aspirations of becoming a pro soccer player and getting a college degree in business.

IVLA student government has coordinated the very first talent show! Students of all ages were invited to submit their videos for consideration. The talent show was divided up into categories for entries: elementary school, middle school, and high school. The judges were comprised of the members of student government in addition to three teachers. We received […]

We’re elated to announce that IVLA senior, Nick Dunlap, will be attending the University of Alabama in the fall! Nick will also be joining the outstanding UA Men’s Golf team.

At IVLA, our diverse students around the world have an enormous array of goals, interests, hobbies, and ambitions. As is customary in many countries, the majority of our students will continue furthering their education in the fall after their graduation. Others will carry on their current path in pursuit of their passion in sports or […]