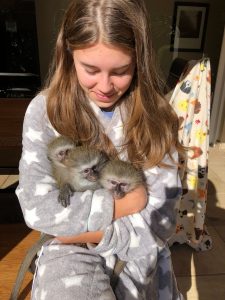 Riley Beyers, an IVLA student who lives in South Africa with her mother, Joeleen Beyers, a primatologist, has had quite an extraordinary life! Ten years ago, her mom received a call regarding a baby vervet monkey whose mom was shot and killed on a farm. They had heard through friends that her mom studied primatology in college and had worked with primates before. After taking in the monkey, more and more continued to come in. Her mother founded Monkey Matters in partnership with another woman rescuing primates. Together, Monkey Matters rescues orphaned, injured, or displaced South African primates, and offers educational programs about primates and conflict resolution between wild primates and humans to the public. The workshops are given to both communities and schools to help foster a harmonious relationship between human and non-human primates. 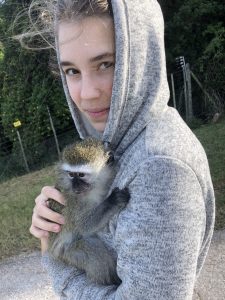 Because Monkey Matters is not a sanctuary, and they rehabilitate the monkeys in their home, Riley gets to spend time with the monkeys every time they have one! The length of time that the monkeys stay with them varies. Monkey Matters operates in a similar fashion to a halfway house for the monkeys; the goal is to have them leave as soon as possible, once they are ready. All their rescues that are orphaned or ex-pets must be sent to reputable primate rehabilitation centers for troop-forming. Monkey Matters has been working with the most successful primate facility in South Africa for many years and they are thrilled to see their monkeys released back into the wild.

Riley has the rare and exciting opportunity to spend a lot of her time with the monkeys each day! She gets to help feed them, play with them, comfort them, and help in other ways with their rehabilitation. She has been able to capture her involvement with a treasure trove of photos and videos. Because the number of monkeys that they have at any given time and the care that the need can greatly vary, IVLA has been the perfect solution to her busy schedule. She can adjust her school schedule each day to accommodate the needs of the monkeys at any given time. The flexibility that IVLA offers has allowed her to participate in Monkey Matters as much as she wants!

When she is not hanging out with the monkeys, Riley spends her free time drawing and writing short stories. She has every intention of continuing to work with animals in the future. After high school, she plans on attending college in the United States to study either wildlife or zoology. Riley, we are so proud of the impact that you are making in the life of each monkey you take in and cannot wait to see how many other animals you help!

In celebration of our 15th anniversary, we invite you to tag us in photos of yourself holding up the number 15 (in whatever creative way you like) at sightseeing destinations around the world. Whether a well-known landmark or a local treasure, the destination of the photo is your choice! As admirers of the Girls Who Code […]

Read More
First Day of School - Make it a Memory!
jgee288
No Comments

Another school year is already about to begin! At IVLA, you can enroll and begin classes whenever you want, but many students decide to start their new school year in the fall. Kick off the new school year with IVLA by filling out this card and then share it on social media! Include a photo […]