IVLA student Dillan McDonough has been calling the greater United States his home for the better part of 2021. Originally from South Carolina, he has been traveling the country with his parents and dog, Buddy, since April of this year. They purchased a beautiful brand-new Airstream, loaded up their belongings, and have hit the road for the past four months! Dillan likens living in an Airstream to living in a tiny 300 square foot apartment. There are beds, a small kitchen area, and a dinette that doubles as a place to have meals and work. They also have an office area with a built-in desk, chair, and cabinets. Although the bathroom is small, it has everything they need, including a nice shower. As he puts it, they have space for the things that matter most! 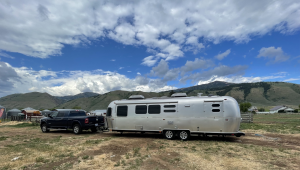 The McDonough Airstream traveling across America

The entire family feels incredibly lucky they have been able to travel to so many different and unique regions of the country. Some of their favorite places include coastal Oregon for its rugged beauty, San Diego for its weather and beaches, North Dakota for the peaceful Devils Lake region and Michigan for the quiet beauty of the Upper Peninsula. Some of their favorite adventures so far include petting alligators on a Bayou boat ride in Louisiana, hiking the rough terrain near the California/Mexico border and exploring the beauty of Yellowstone’s Ole Faithful and other geysers at sundown. Curious what the next big adventure is that they have their eyes set on? Alaska.

Their dog, Buddy, is a great travel companion. He doesn’t mind long travel days and loves the smells of each new location. He enjoys going on walks, exploring new areas, and meeting new people. Many places, such as national parks, have trails where you can take your dog along with you. While Buddy is, undoubtedly, their favorite animal, they’ve spotted plenty of others along the way. They loved seeing the cute prairie dogs and the wild horses running freely at Theodore Roosevelt National Park in South Dakota. Yellowstone’s bison and elk are fun to see but coming across black and brown bears is their favorite. They conjure the feeling of being scared and amazed at these fascinating creatures at the same time; that’s quite an experience.

In between these big adventures, Dillan still manages to be in school! He does his schoolwork on his computer in the office of the Airstream or outside on his laptop depending on where they are. He manages his time to make sure that he has time to complete his schoolwork, no matter what. A typical day begins in the morning when they take Buddy for a walk, have breakfast, and then begin their work. He takes his classes and does his homework while his parents run their family business, YouTube channel “The Interview Room with Chris McDonough.” In the afternoon they explore the area they’re visiting, whether it’s hiking or fishing or taking a tour. Since they live in a small space, they spend a lot of time outside. They cook outside as often as possible, and in the evenings love to sit around a campfire often playing guitar or chatting with folks they meet.

Dillan also helps with the family business by filming and editing for their YouTube channel. He makes sure that everything runs smoothly and accurately when his dad is working on solving a case. Although he’s not interested in solving crimes himself, he is hoping to fly jets for the United States Air Force one day. That requires quite the adventurous spirit, and Dillan has plenty of it! We can’t wait to follow along with the rest of his adventures in both the short and long term.

Meet 17-year-old basketball superstar and IVLA 10th grader, Lili Krasovec. Lili's dream is to become a professional basketball player! She currently plays for the national women's basketball team in her home country of Hungary, and has even played in the World Championships. Lili moved to Rome, Italy last year to further her skills in the sport and credits IVLA and […]

IVLA student Dillan McDonough has been calling the greater United States his home for the better part of 2021. Originally from South Carolina, he has been traveling the country with his parents and dog, Buddy, since April of this year. They purchased a beautiful brand-new Airstream, loaded up their belongings, and have hit the road […]